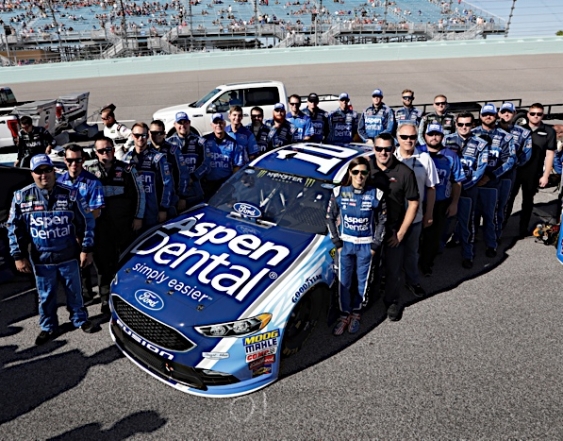 - The No. 10 Aspen Dental Ford Fusion team cracked the top-20 at lap 14. Patrick noted the car was “tight in the center” and lacked grip as she dropped back to the 25th position, so crew chief Billy Scott called for a wedge adjustment when the team pitted at lap 38.

- The adjustments help improve the car’s handling, and Patrick went from 26th to 24th in the final laps of the stage.

- Patrick raced her way up to the 18th position as the car’s handling continued to improve after additional adjustments by the team. She made contact with the outside wall with more than 20 laps to go in Stage 2 and noted smoke in the cockpit.

- The team checked for damage, and the following lap the No. 10 Aspen Dental Ford made contact with the wall in turn two after cutting down a tire. The car sustained significant damage, which ended the team’s day with a 37th-place finish.

- Patrick was evaluated and released from the infield care center following the accident.

- Patrick finished the season with 511 points, which put her 28th in the driver point standings.

- There were five caution periods for a total of 26 laps.

- Martin Truex Jr. won the Ford EcoBoost 400 to score his 15th career Monster Energy NASCAR Cup Series victory, his eighth of the season and his first at Homestead-Miami Speedway. His margin of victory over second-place Kyle Busch was .681 of a second.

The 2018 season kicks off Feb. 10-18 with the traditional Speedweeks at Daytona (Fla.) International Speedway. The 60th Daytona 500, the first points-paying race of the season, is scheduled for Feb. 18 and will be broadcast live on FOX.